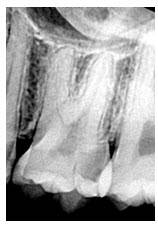 The clinical case yesterday was an excellent teaching cases for several reasons; the most dramatic aspects were the complex MB root canal system but also the palatal canal brought complexity-both during the GentleWave cleaning procedure and after the fill.

In pre-op CBCT imaging, the MB root showed at least two MB canals, possibly an MB3, but certainly there was at least one ladder-rung isthmus channel btn MB1 and MB2. The MB1 was negotiated-as was the DB-with a 13-.06 Traverse Rotary Negotiation File (Kerr Endo), but the MB2 had an apical impediment that I was able to negotiate around within a mm of the terminus with bent hand K-files. Because of this apical irregularity, I depended on the GW procedure to clean beyond the extent of my instrumentation (this works like a champ) and I shoved a GTX carrier to the binding point with a rapidomente' 1-second insertion time, to fill further ahead of the carrier.

Post-op imaging of the MB system fill shows a ladder-rung isthmus 3mm above the pulp chamber floor, and faintly shown is a second lateral canal that branches off the MB1-toward the MB2-in its last 2mm, turns 90 degrees, and becomes the third apical portal of exit. The palatal canal was a whole different challenge-the root tip was above the sinus floor, presenting a problem during GW cleaning, when just after the NaOCl cycle completed, air from the patient's sinus space was pulled into the pulp chamber by the vacuum pressure created by the GW machine-one of the few things that will interrupt GW. Two things were very interesting about this, #1 for me was the fact that despite the open passageway into the sinus space, the patient had zero awareness, neither taste or smell, of bleach in her nasal passages. All of my experience with GW-including in open apex cases-has been the same. The negative pressure created by the GW machine prevents the outflow of NaOCl-GW is a very, very clever invention.

The second palatal point of interest was how this patency tract allowed a remarkably large amount of surplus sealer to be shot out the end of the palatal canal-I was using a new sealer syringe tip (it's too big) and I must have lightly bound it mid-root in the canal before I pushed on the plunger. Why did I call it a point of interest instead of a devastating mistake? Because the bio-ceramic sealer I used is 100% bio-compatible and because it will be gone the next time she blows her nose.

Would I be more concerned if I had left a bolus of surplus sealer in the medullary space? I've actually done that-same problem, the sealer syringe tip provided by the mfr is soft and tapered and too easily binds the canal-causing a 5mm pea-sized surplus sealer load out the end of a #13 (in medullary space). It was the 3rd time I had used the sealer and when I saw the radiograph, it literally took my breath away. I was embarrassed, but showed the patient, telling him (he was a repeat customer) I would take care of the cost any secondary procedures that might be needed to remove it if there was discomfort associated with it. I called him that night-he didn't even take an Aleve. I recalled him 3 months later and it was completely gone! So I call bio-ceramics the "What, me worry?" sealer (apologies to Mad Magazine).

There was a question during the demo about why the RCT was done when it was a vital case without direct exposure. Without a doubt, pulp capping is a very predictable procedure, but her prolonged reaction to thermal stimulus (cold test response longer than 15 seconds with an ache remaining) indicated that the pulp was irreversibly inflamed. With that said, the patient has 5 other teeth with deep decay, however, they all tested WNL to thermal stim, so pulp capping will be done on them instead of invading them.

Thank you for watching, thank you for your questions, please join me again for our next LiveEndo.

See you at the apex,